An international team of astronomers, co-led by Dr Rita Tojeiro of the University of St Andrews, have produced the largest-ever, three-dimensional map of the Universe, using distant galaxies.

Hundreds of scientists from the Sloan Digital Sky Survey III (SDSS-III) collaborated to make the map, and then used it to make one of the most precise measurements yet of the dark energy currently driving the accelerated expansion of the Universe. Dr Tojeiro explains:

“Over the last decade we have prepared and conducted the largest survey of the Universe yet. By measuring the positions of 1.2 million galaxies over one quarter of the sky, we mapped the three-dimensional structure of the Universe over a volume of 650 cubic billion light years. Using this map we were able to make some of crispest measurements yet of how dark energy is driving the expansion of the Universe.”

These new measurements were carried out by the Baryon Oscillation Spectroscopic Survey (BOSS) program of SDSS-III.

Shaped by a continuous tug-of-war between dark matter and dark energy, the map allows astronomers to measure the expansion rate of the Universe and thus determine the amount of matter and dark energy that make up the present-day Universe.  A collection of papers describing these results was submitted this week to the Monthly Notices of the Royal Astronomical Society.

BOSS measures the expansion rate of the Universe by determining the size of the baryonic acoustic oscillations (BAO) in the three-dimensional distribution of galaxies.  The original BAO size is determined by pressure waves that travelled through the young Universe up to when it was only 400,000 years old (the Universe is presently 13.8 billion years old), at which point they became frozen in the matter distribution of the Universe. The end result is that galaxies are preferentially separated by a characteristic distance, that astronomers call the acoustic scale. The size of the acoustic scale at 13.48 billion years ago has been exquisitely determined from observations of the cosmic microwave background from the light emitted when the pressure waves became frozen.  Measuring the distribution of galaxies since that time allows astronomers to measure how dark matter and dark energy have competed to govern the rate of expansion of the Universe.

“If we were to scale the volume of our survey to a cube 1 mile on each side, then the visible part of an individual galaxy would be about 1 millimetre across. Our challenge in the analysis of this map was equivalent to measuring the distances between all the pairs of galaxies separated by 100 yards throughout a cubic mile of space!”

To measure the size of these ancient giant waves to such sharp precision, BOSS had to make an unprecedented and ambitious galaxy map, many times larger than previous surveys.  At the time the BOSS program was planned, dark energy had been previously determined to significantly influence the expansion of the Universe starting about 5 billion years ago.  BOSS was thus designed to measure the BAO feature from before this point (7 billion years ago) out to near the present day (2 billion years ago).

Dr Florian Beutler of University of Portsmouth, who led two of the papers submitted this week, said:

“If dark energy has been driving the expansion of the Universe over that time, our map tells us that it is evolving very slowly if at all: the change is at most 20% over the past 7 billion years.”

“We see a dramatic connection between the sound wave imprints seen in the cosmic microwave background 400,000 years after the Big Bang to the clustering of galaxies 7-12 billion years later. The ability to observe a single well-modelled physical effect from recombination until today is a great boon for cosmology.”

The map also reveals the distinctive signature of the coherent movement of galaxies toward regions of the Universe with more matter, due to the attractive force of gravity. Crucially, the observed amount of infall is explained well by the predictions of general relativity. This agreement supports the idea that the acceleration of the expansion rate is driven by a phenomenon at the largest cosmic scales, such as dark energy, rather than a breakdown of our gravitational theory.

Dr Tojeiro funded her travel to support the project using her 2015 L’Oréal-UNESCO For Women In Science Fellowship (FWIS) award. These fellowships reward outstanding female postdoctoral researchers, with the aim of encouraging greater participation of women in the field of science. 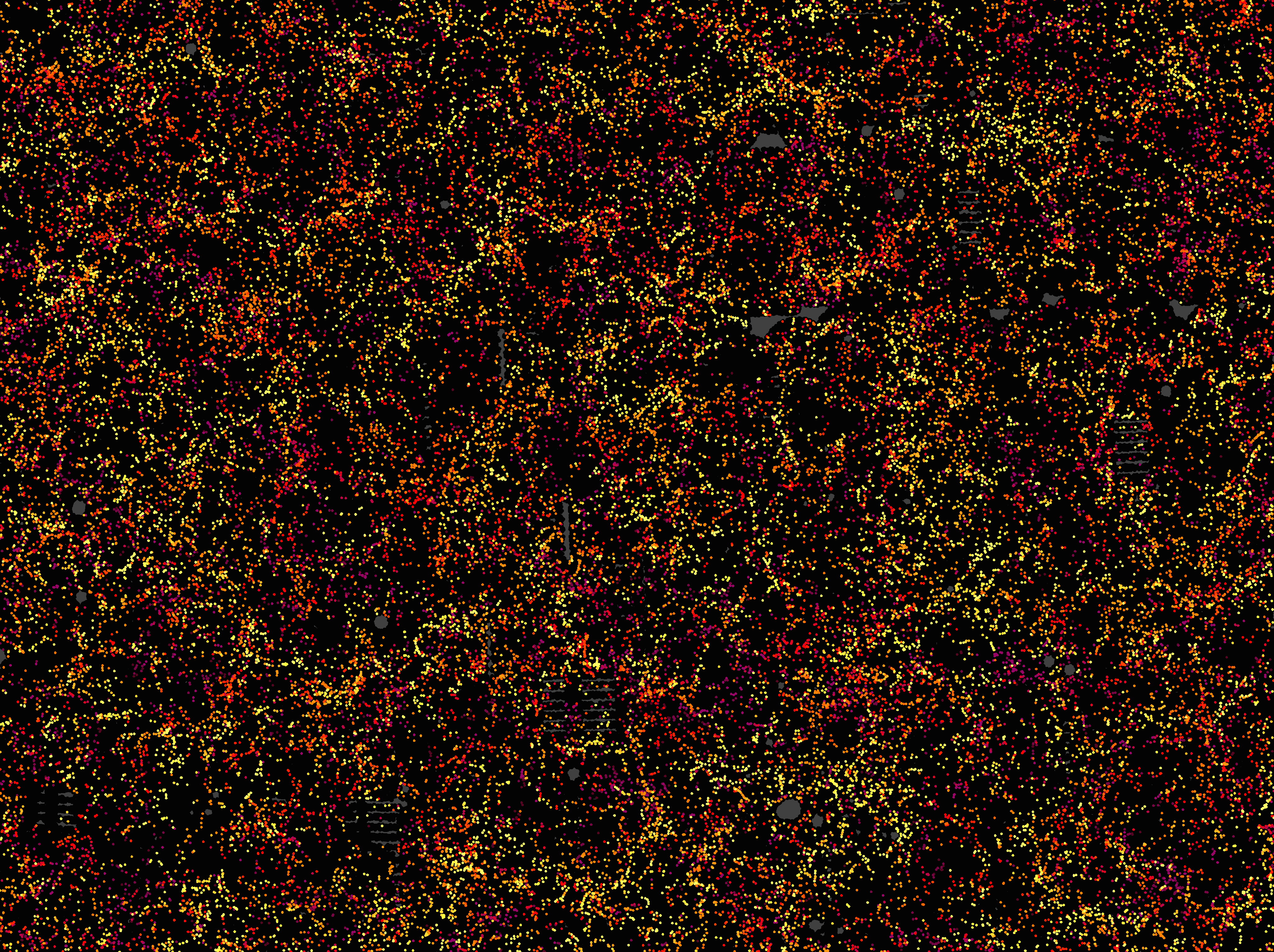 This is one slice through the map of the large-scale structure of the Universe from the Sloan Digital Sky Survey and its Baryon Oscillation Spectroscopic Survey. Each dot in this picture indicates the position of a galaxy 6 billion years into the past. The image covers about 1/20th of the sky, a slice of the Universe 6 billion light-years wide, 4.5 billion light-years high, and 500 million light-years thick. Colour indicates distance from Earth, ranging from yellow on the near side of the slice to purple on the far side. Galaxies are highly clustered, revealing superclusters and voids whose presence is seeded in the first fraction of a second after the Big Bang. This image contains 48,741 galaxies, about 3% of the full survey dataset. Grey patches are small regions without survey data.

This is a section of the three-dimensional map constructed by BOSS. The rectangle on the far left shows a cut-out of 1000 sq. degrees in the sky containing nearly 120,000 galaxies, or roughly 10% of the total survey. The spectroscopic measurements of each galaxy — every dot in that cut-out — transform the two-dimensional picture into a three-dimensional map, extending our view out to 7 billion years in the past. The brighter regions in this map correspond to the regions of the Universe with more galaxies and therefore more dark matter. The extra matter in those regions creates an excess gravitational pull, which makes the map a test of Einstein’s theory of gravity.

Written By
Mark
More from Mark
For many of us, buying a house is a life goal. Becoming...
Read More