Every now and then I ponder that terrifying concept of death and all the mystery that surrounds it, when will it happen, how will it happen and what will happen after? It’s all very scary and I got to thinking whether or not I would like to know when my time is up. Part of me thinks that I would like it and that it would make me change my lifestyle, turning me in to some kind of super human. I think realistically though; the changes would probably last a couple of days. Now, thanks to maths and science we can give it a good shot. It is based on lifestyle choices and where you live and all those kind of things.

According to https://www.sunlife.co.uk/life-cover/over-50-life-insurance/death-clock/ I only have 55 years left to make my mark in this world, all a little unsettling but I suppose quite helpful and definitely interesting. It has encouraged me to take my bucket list more seriously because the time I’ve already had on planet earth has flown by so it’s certainly time to start checking some of them off. 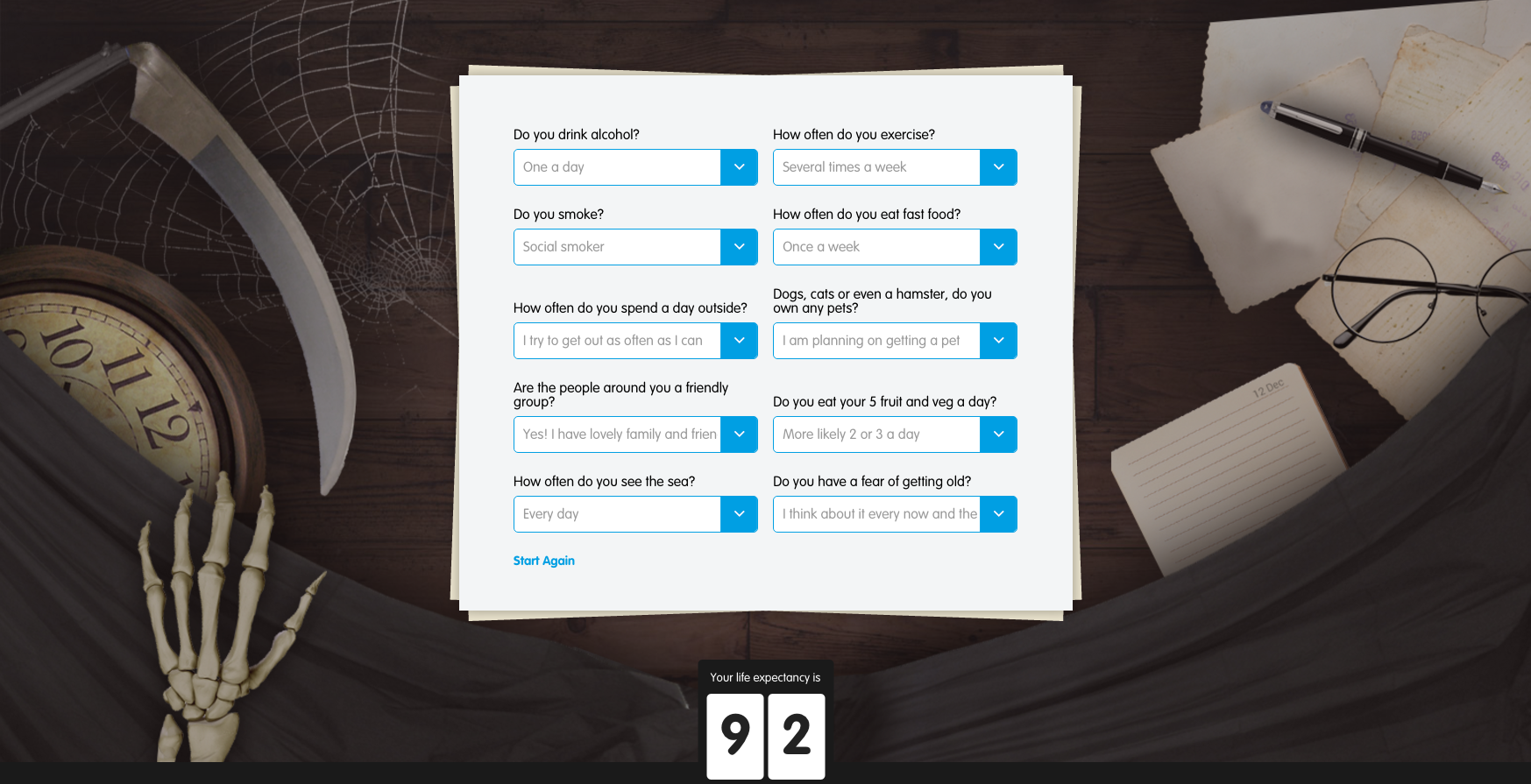 It seems a bit like sci-fi, that I know when I’m going to die and the world seems to be going that way more and more often. With hover-boards and x-ray glasses the planet is turning into something else, something scary but pretty cool. The death clock gives us a pretty good idea of when it’s all going to end but it doesn’t give me a definitive, 100% answer which is why I quite enjoy doing it. If it could tell me that I was going to get hit by a bus next week I’m not sure I’d fill in the questionnaire. Life, as we know, is unpredictable and I personally think that’s probably a good thing.

However, I suppose if you could find out the exact date of your death and be completely certain of it that could lead to some pretty wild adventures. No longer would you be afraid of getting involved with extreme sports, from gnarly snowboarding jumps, to bungee jumping, even to base jumping. It would eradicate all fear, until about a month before your due date. There would be pros and cons I guess and it will depend on what type of person you are on whether find out would be a good or a bad thing.

Ultimately, it’s pretty unnatural to be able to know when you die and in that sense some people will not be a fan of a death clock. But then I guess people said that an airplane would be unnatural and now we all use that, even driving could be considered a strange thing but it has become normal, day to day life. And maybe one day everyone knowing when the end of their life will be common, who knows?

What I have learnt from knowing when I am supposed to die is what areas I need to change in my life to make it last that little bit longer. All things that I have been told time and time again – eat healthier, exercise more, try and be positive, all these good things and I’ll make it to a later date, after all, every little helps.

Written By
Mark
More from Mark
Do you really want to watch your children sit inside and play...
Read More